I hope everyone had a great holiday season.  I, for one, had a wonderful holiday and as you'll (hopefully) see over the next few weeks, I had a very LEGO Christmas!

For my first review of 2021, I wanted to start with one of my Christmas gifts.  The Gallimimus and Pteradnodon Breakout set (set #75940) was a Christmas present from my brother - he had ordered it from LEGO.com and although it ended up shipping after Christmas, it still counts as a Christmas gift! 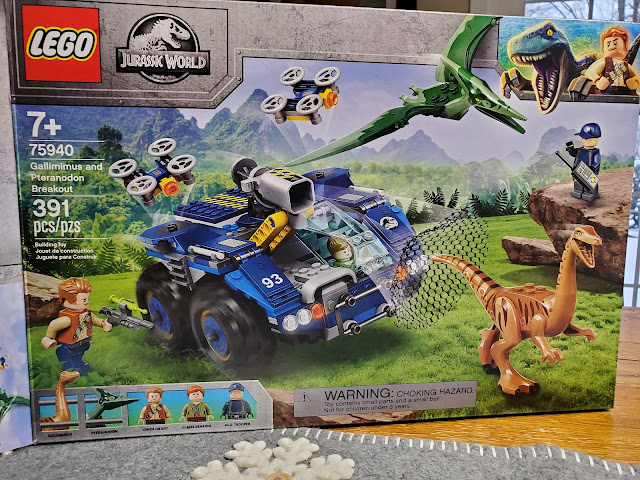 This particular set is part of the Jurassic World theme and contains 391 pieces including two different dinosaurs and three minifigures.  This particular set retails for about $50 so at first glance the price-per-part ratio isn't very good...but then you do get two dinosaurs out of the set.  So, the questions becomes - is it worth it to buy the set (obviously if you get it as a gift like I did then it's totally worthwhile)!

We begin as one does when one gets a new LEGO set - by opening the box and dumping out the contents.  For this set, we find two different instruction books and some numbered bags of pieces plus a sticker sheet. 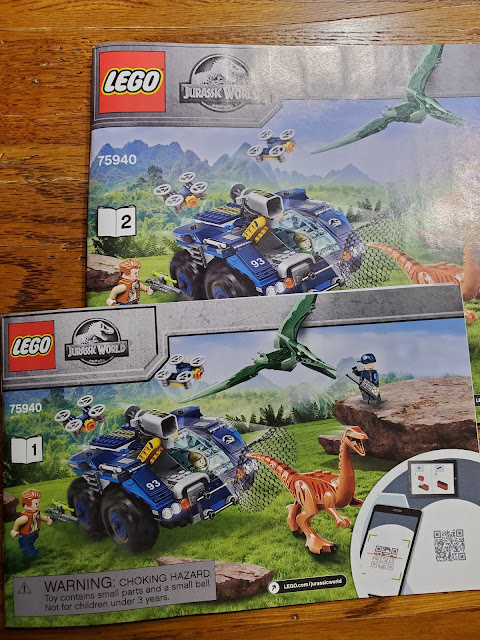 In general, I don't care for stickers but I've grown use to having to apply them.  This particular set has 14 different stickers to apply but none are overly difficult to place correctly which is good.  I do think the stickers add to the set so I didn't hesitate to apply them to my copy.  I also didn't think to grab a photo of the sticker sheet prior to using it so here's the "empty" sheet instead. 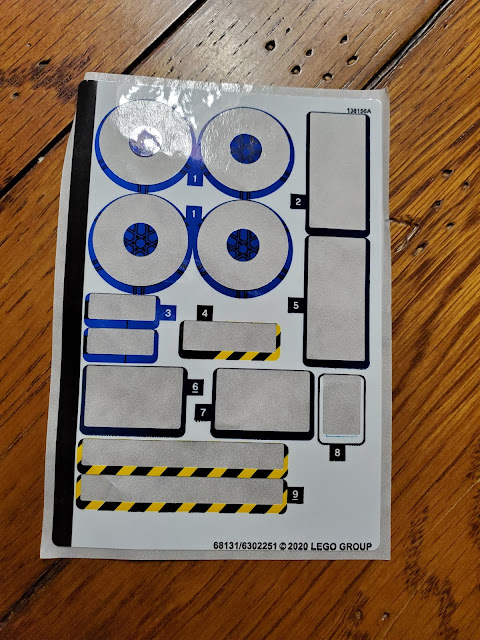 For most collectors, I'd have to imagine that the dinosaurs are the reason why one would even consider this set in the first place so let's start with them. 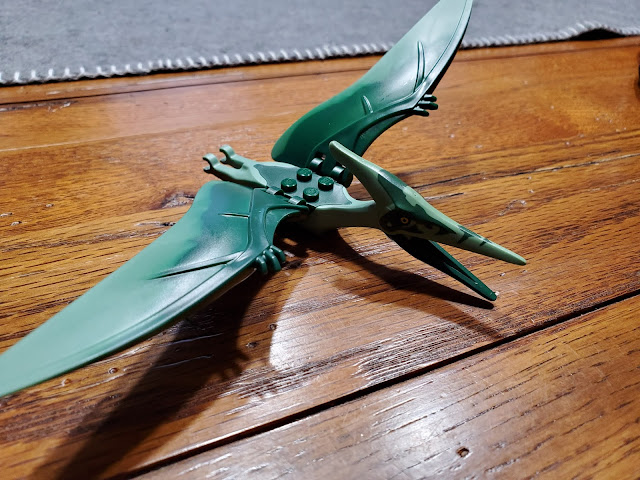 We'll begin with the Pteranodon since that particular dinosaur has been done multiple times before.  For me, this is my second Pteranodon in my collection - but the first in this lovely sand green / dark green color scheme.  I definitely approve of this guy.

The other dinosaur is even better - the star of the set:  Gallimimus. 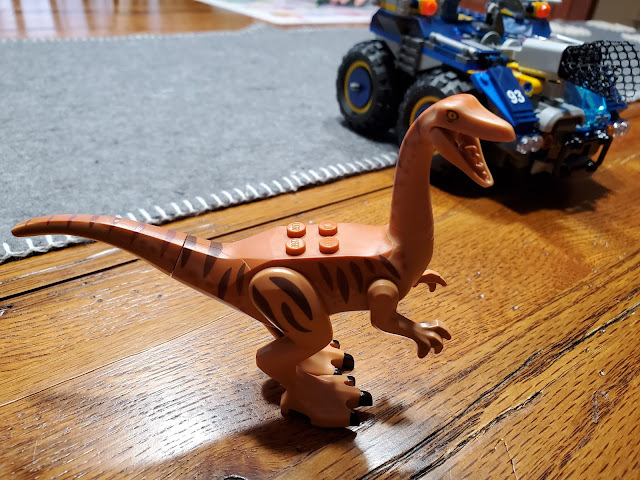 If I'm not mistaken, LEGO has never made a Gallimimus figure prior to this particular set.  That said, most of the figure has been done before - the body is basically a raptor's body but with a different neck/head piece.  Still, it works well and I definitely like this dino!

Besides the two dinosaurs, the set comes with three minifigures:  Owen Grady, Claire Dearing, and an ACU Trooper.  Amazingly, according to Brickset at least, only the ACU Trooper is unique to this set!  The Owen figure is in two other sets while Claire finds herself in four other sets.

For some, the rest of the set probably doesn't even matter but for $50 I think we ought to look at what makes up the rest of the build:  the vehicle used to help capture the runaway dinos. 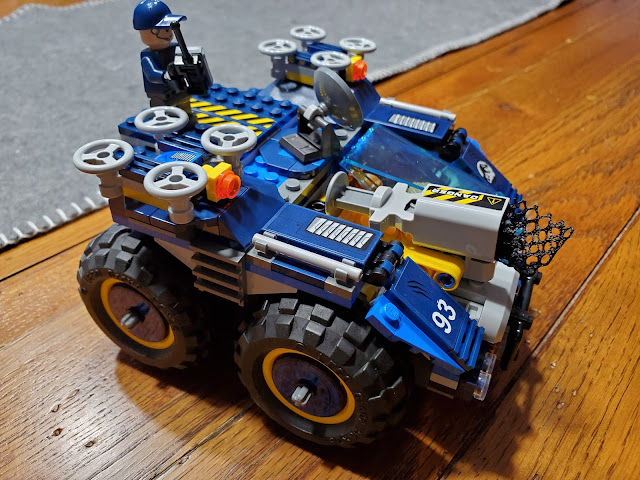 As you can see, the vehicle is big and blocky!  On the top of the vehicle, you can see two detachable drones along with a spinning radar dish and an adjustable net shooter (which really does shoot the net fairly well).  There's also an opening cockpit that seats not one, but two different minifigs (which is a nice detail). 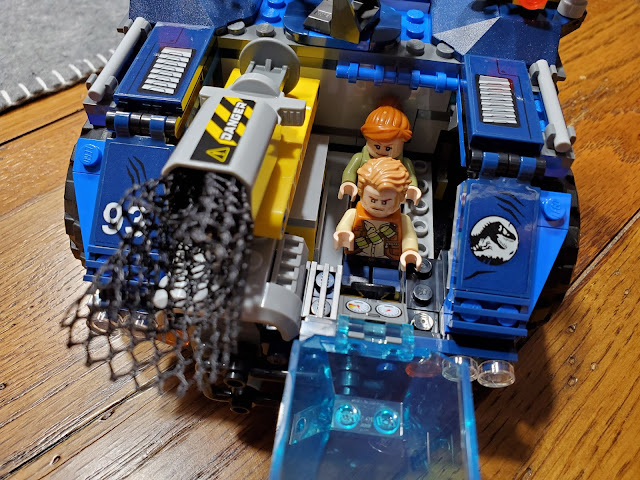 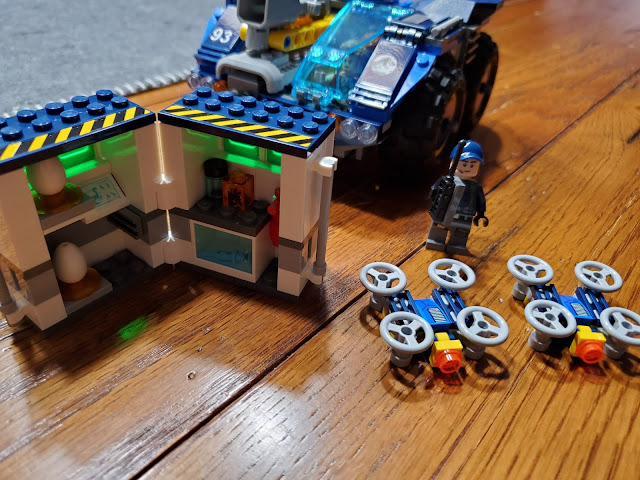 Inside the crate you'll find a couple of dinosaur eggs, a small refrigerator (with syringe inside), a fire extinguisher, a computer, and a mosquito trapped in amber (printed piece). 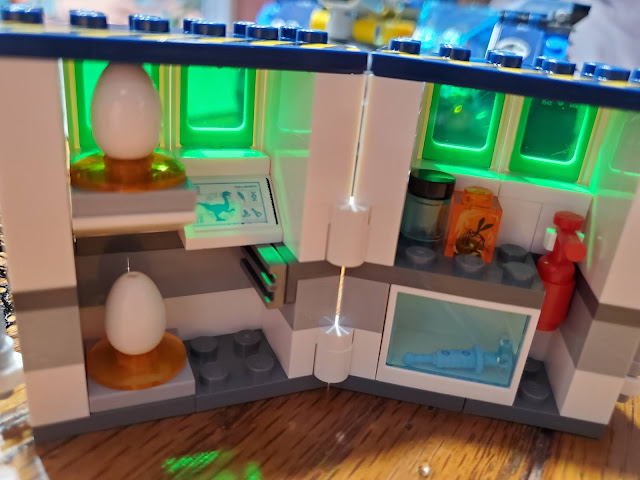 The mosquito was a fun surprise that I wasn't expecting - and it definitely makes the research crate feel like it belongs in a Jurassic Park set.

Other than that, that's basically it for this set.  The vehicle is a big thing with thick, rubber tires.  After I built the set, I let my two-year-old play with it and he instantly starting calling the vehicle the "really, really, really cool car with tires."  He loves rubber tires on his toys right now so this particular spoke to him I guess.  He also enjoyed playing with the net shooter - and once I showed him how to fold the net back up he was able to use it all on his own!  The one downside to the play factor is that the wheels of the vehicle are so close together that it's actually kind of hard to make this car turn sharply...or even turn at all if I'm being honest.  If only there was a Technic-style steering knob at the top of the car (maybe in place of the satallite dish) then this would be a perfect vehicle for play.

Still, as it is the car is fun - the two removable drones plus the research crate means that there is much more here than maybe meets the eye at first (or, say when looking at this set on the store shelf).  Dinosaurs will probably always be the star of the show for any Jurassic World set but this particular vehicle ends up surprising in all sorts of good ways! 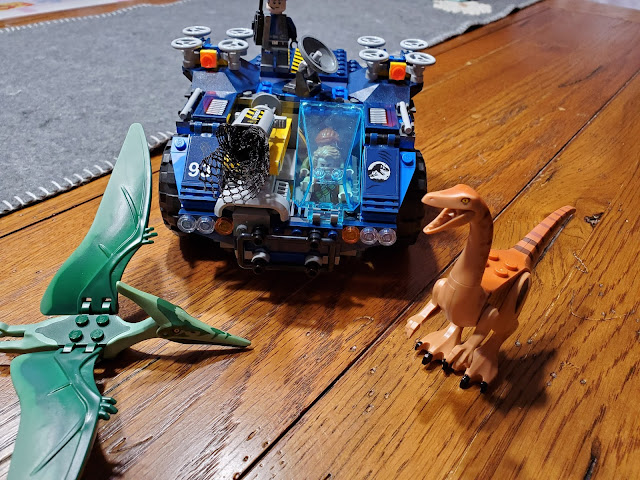 The good news for my rating system is that I'm going to be able to be much more exact on my "kid value" and "play value" ratings based on how my son takes to sets I review.  Obviously, in his eyes this set was a hit!  The price-per-part ratio hurts here but getting two dinosaurs (one unique and one in a new color) helps to alleviate that a bit.  Three minifigs plus a vehicle that is solidly built (and quite large) rounds out a fairly solid package overall.  If I'm being honest, I wouldn't have bought this set for myself (thinking who needs that car for the price) but now that I have the set, I do think it's probably worth close to its retail price!  If you can get this for about 10-20% off, then it's a no-brainer recommendation from me (especially if you want a Gallimimus for your LEGO Jurassic Park)! 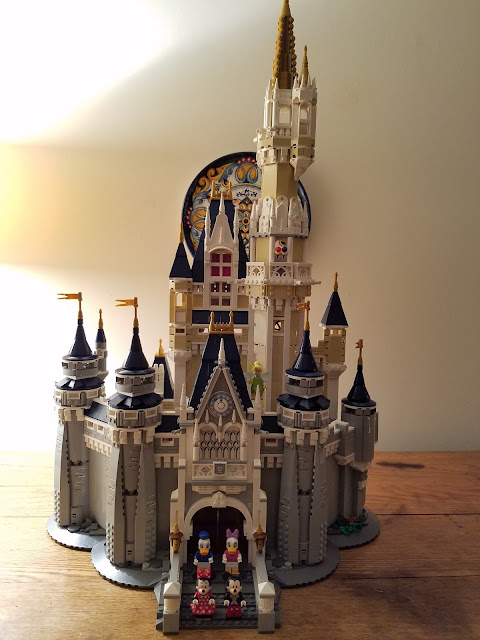 Let's get this out of the way first:  I'm an adult male who never was much into Disney movies as a kid (or as an adult).  In fact, other than Aladdin, I can't think of any animated Disney movies that I wanted to watch multiple times as a youngster.  I start with that to say that I am probably not LEGO's desired target audience for the LEGO 71040: Disney Castle set.  And yet, it must be said, I love the set! The set itself is huge - both in terms of number of pieces (4,080) and in terms of actual width and height (29" high and about 19" wide).  The set is easily the largest set that I've ever assembled!  Heck, even the single included instruction manual is huge (490 pages). The Disney Castle set is full of great features and hidden nods to many classic animated Disney movies.  The view from the front of the castle is mostly what you'd see if you went to Disney World in Florida...but from the back, the Castle has an open back (much like a dol 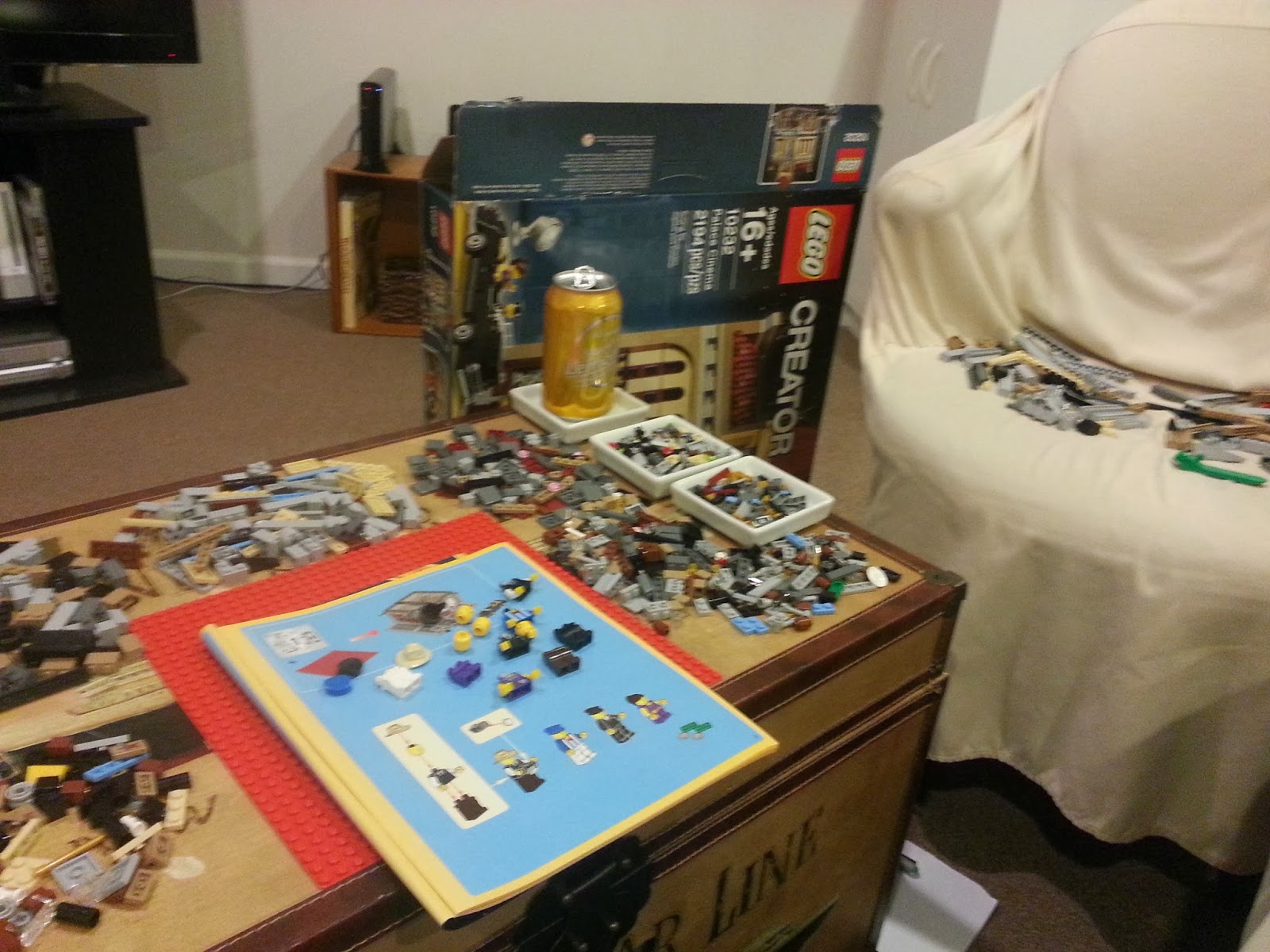 The LEGO Palace Cinema (set #10232) is the third set in the Creator Modular Building line that I've had the opportunity to build.  I've previous built (and reviewed) the Pet Shop and the Fire Brigade.  How does the Palace Cinema stack up to the two previous sets (both of which I loved)?  Read on to find out! The Palace Cinema contains 2194 pieces which means it slots in right between the Pet Shop (2032 pieces) and the Fire Brigade (2231 pieces).  As you'll see from the full review, the Palace Cinema's piece count is inflated a bit because of all the small pieces included.  In fact, I found the build processes of the Pet Shop and the Fire Brigade to both be more satisfying for the most part (though some of my favorite individual builds occurred in this set). I think I need a bigger surface to use for spreading out pieces when building a set of this size! The set's directions begin with instructions for building the included limousine car. Presumably, 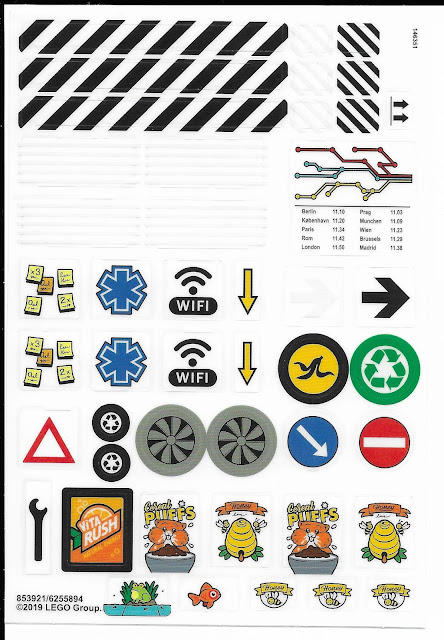 I know that I promised that I'd show off the rest of the 1990 LEGO Magazine and I will do that eventually but in the meantime I want to take a quick look at LEGO 853921 - LEGO Brick Stickers from the LEGO Xtra line of sets. I actually ordered this set quite some time ago but LEGO was out of stock of the product at the time I ordered.  Months later (and I do mean months later), I finally got my own copy.  Actually, I bought two copies but that's neither here nor there.  As you can probably guess from the name of the set, this is an Xtra set that's basically all about stickers.  Yes, there are a few (12 total) LEGO bricks that come along with the set but they are mostly just basic pieces designed to have stickers stuck to them (plus one pretzel piece for some reason).  The real star of the set is the five sheets of stickers, so let's take a look at those! We'll begin with the most boring sheet of stickers out of the five.  On it's own, this is a perfectly